skip to main | skip to sidebar

This past week our team leader met with senior officials from Passport Canada. What an eye opener that was.

We had proposed a meeting to discuss diplomatic and special or official service visas for government and military clients. The reason was due to our team having seen the poor attitude and abysmal service from the government clerks and drivers who are currently tasked with visiting the embassies and high commissions to get visas on behalf of the government. Direct witnessing and feedback from embassy workers shows that the Canadian government staff are not viewed as being professional or courteous. Another set of events which brought the special visa issue to our attention is that fact that civil servants from a wide range of departments and agencies, as well as military officials, have come to us for visas and visa advice.

The response by Passport Canada to this information was both shock and outright denial.

Passport Canada officials had no idea civil servants and military staff were looking for visa services outside of the government. This they quickly noted and vowed to investigate. One official immediately assigned blame to renegade managers in various departments. There was no consideration that perhaps poor service by Passport Canada could be driving away their in-house clients.

But the most bizarre response to the information was the outright denial that there were any such problems. One senior official demanded 'where is your data?', and followed by stating that they had 'never heard a complaint' about this before.

That must be the ultimate weasel excuse: I never heard that complaint before. Are you asking the right people? Are you looking in the right places? Are you listening when issues are exposed? Judging from the reception this information received by some senior officials, Passport Canada is not necessarily receptive to negative information. My team was told that such stories were only anecdotal, and that there was no numerical data to back up the assertion of a problem at the face-to-face level in the embassies.

In the real world of customer service in the private sector, it is said that for every complaint you hear, another fifteen customers said nothing but were unhappy and will probably never come back. In the world of Passport Canada, one senior official repeated no less than four times during the meeting that they had a 98% approval rating from Canadian passport-seeking clients. This was strange as the CEO of Passport Canada says the approval rating is only 96%. Well, when you have a total monopoly, you can afford to blow off the complaints of the other 2% even though they amount to 87 500 people, or 175 000 people at the CEO's 4%. These figures are based on the number of passports issued in the last year for which there is an annual report.

My team did learn that Passport Canada has an entire division of people tasked with providing diplomatic and service visa support to the government, and that this group has about 20 permanent staff and takes on extra staff during peak periods. Now this group has to process an estimated 2000 civilian special visas per year, or about 100 visas per person per year, or two visas per person per week. Since the military visas are done as a group for single countries, they would not even qualify as individual cases in the business world, but simply be done as a single group.

How can this even be possible? How can an organization do so few visas with so many staff? What are Canadians getting for their tax money and for their passport fees?

In the private sector this work is done by fewer than five people.

Why can my team do this job with a fifth of the staff, and without alienating the embassy workers, while the government seems to need a bloated and inefficient group?

Over the years Passport Canada has had a significant number of senior officials posted in to try to fix what has historically been a somewhat dysfunctional agency. This is not going to change any time soon. Making the situation worse is the unwillingness of some senior staff to listen to outside criticism and to accept offers of assistance.

Canadian taxpayers and the Canadian government and military deserve better.
Posted by Pam the Visa Specialist at 07:58

We have a new game for you: it is called "GUESS THE LOCATION".

Look at the photo below, then try to guess where it is. Simple.

After a week we will post the correct answer.

Challenge yourself and your friends. 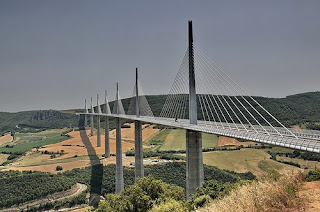 Yes, it is in fact MILAU FRANCE. Thanks for playing.
Posted by Pam the Visa Specialist at 10:39

Brazil has once again announced new prices for visas.

The really great news is that the prices are actually lower than before. This was a bit of a surprise.

Click here for Brazil visa applications.
Posted by Pam the Visa Specialist at 12:20

Russian service back to normal

Now that the G8 and G20 meeting disasters are over in Toronto, things are back to normal with the Russian Embassy.

This means processing times for rush service are back down to 24 hours.

So now is the time to go to Russia!

Click here for Russian visa forms.
Posted by Pam the Visa Specialist at 12:14

Wow, what a great ship & trip

Last week we sailed on Cunard's QUEEN MARY 2 for a long weekend cruise from New York to Halifax and Boston. The service was even better than two years ago. Our butler, Julian, was the best we have ever experienced; the wheat-free food even better than before. Halifax was great, and the fourth of July fireworks all over Boston were amazing. Once again, Cunard has done it all.

Click here for Cunard and great ships.
Posted by Pam the Visa Specialist at 12:09